82 Eight Lots Road
This monument was erected by the Sutton Historical Society, Inc. in 1976.
It designates the general location of the first town meeting held on December 3, 1718​ 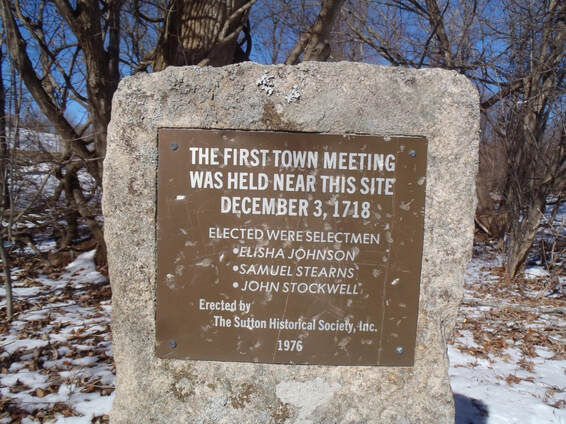 Founded in 1704 and settled in 1716, the town of Sutton was an eight-mile square section of land which included parts of the current towns of Grafton, Millbury, Northbridge, Upton and Auburn.

The first town meeting was held at the house of Captain John Stockwell.
This house was a small one, about 15" by 10".

Elisha Johnson, whose family was one of three families to spend the winter of 1716 in Sutton, was elected moderator.
Selectmen, a town clerk, and a constable were chosen.
Selectmen: Elisha Johnson, Samuel Stearns, and John Stockwell
Town Clerk: Elisha Johnson. He served from 1718-1729
The next meeting was scheduled for March 1719.

Action was also taken on a proposition of the proprietors, that a committee be appointed to act with a committee whom they had chose, to aid in the matter of building a meeting house, and establishing the preaching of the gospel.

Referring to the Proprietors' Records we find that at a meeting held in Boston, March 5, 1717-18, the following votes were passed:

"Voted the same day that the four years charges for carrying on the worship of God, and building a meeting house should begin from this day above mentioned."

"Voted the same day that there shall be twenty pounds raised by the Proprietors and settlers towards the carrying on of the worship of God amongst them which money is to be paid into the Clerk's hands to be improved for that use."

"Voted the same day that Jonathan Draper, Nathaniel Brigham, John Haye, and Nathaniel Brewer are a committee to agree with workmen to build and furnish a meeting house; and the Proprietors obliged themselves and heirs to bear their equal proportion of said charges."

The record in reference to the action of the town in response to the proposal of the Proprietor's Committee is as follows:
​
"The committee of the proprietors who was chosen to manage the affairs relating to the settlement of the worship of God in this Town having made application to the Town at this meeting that a committee may be appointed by this Town to join with them to move forward and carry on proper managements and agreements for said service."

"Voted unanimously that the Town do now choose five persons to be a committee to join with the Proprietor's committee aforesaid, who shall from time to time represent the Town in order to building and furnishing a Meeting house in said Town, and it is Resolved, that William King, Samuel Stearns, Benjamin Marsh, John Stockwell and Freegrace Marble or the Major part of them, be a committee for said service."